This is an article about a fictional representation of an historical character, location or other entity.
American inventor Thomas Edison is first introduced in Season 7 of Murdoch Mysteries, portrayed by David Storch.

Thomas Edison created the practical incandescent electric light bulb and the phonograph. A savvy businessman, he held more than 1,000 patents for his inventions. Thomas Edison was born on February 11, 1847, in Milan, Ohio, youngest of seven children. His father was an exiled political activist from Canada , while his mother was a school teacher.

In 1876, Edison moved his expanding operations to Menlo Park, New Jersey, and built an independent industrial research facility. That same year, Western Union encouraged him to develop a communication device to compete with Alexander Graham Bell's telephone. He never did. However, in December of 1877, Edison developed a method for recording sound: the phonograph. Though not commercially viable for another decade, the invention brought him worldwide fame. In 1879 Edison was granted a patent for his own improved light bulb.

In 1887, Edison built an industrial research laboratory in West Orange, New Jersey, which served as the primary research laboratory for the Edison lighting companies.  He perfected the phonograph, and developed the motion picture camera and the alkaline storage battery. As the automobile industry began to grow, Edison worked on developing a suitable storage battery that could power an electric car.  Edison’s battery for the self-starter on the Model T for friend and admirer Henry Ford was used extensively in the auto industry for decades.

Staring Blindly into the Future 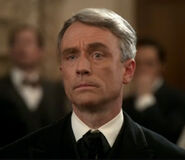 The Filmed Adventures of Detective William Murdoch
Add a photo to this gallery
Retrieved from "https://murdochmysteries.fandom.com/wiki/Thomas_Edison?oldid=54239"
Community content is available under CC-BY-SA unless otherwise noted.