After the assassination of U.S. President McKinley in Buffalo, Ottawa-based spy Terrence Meyers shows in Toronto. The Canadian government is concerned that some of the assassin's co-conspirators may try to make their way to Canada to avoid U.S. authorities. Rumors have it that Emma Goldman is back in Toronto and the police begin rounding up anyone who might be considered the least bit subversive. Among them is Anton Woycek who is later found dead in a warehouse with Meyers standing by him with the gun in his hand. That's enough for the supremely arrogant American spy Allen Clegg who believes Meyers is part of the conspiracy. Murdoch sets out to prove Meyers' innocence and find out exactly what is going on.

Julia to William: "Life without you, William, is worse than death."
William to Julia: "Together, we are stronger than anyone." 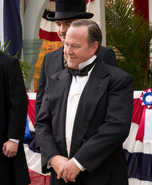 Retrieved from "https://murdochmysteries.fandom.com/wiki/The_Spy_Who_Came_Up_to_the_Cold?oldid=50885"
Community content is available under CC-BY-SA unless otherwise noted.