"The Ghost of Queen's Park"

Murdoch and the Cloud of Doom

The guard on duty at the time, Briggs, swears he saw a ghost push Chilton over the railing. Dr. Grace confirms that Chilton definitely died from the fall but it appears that he fell backwards as if he had been pushed. As far as the ghost is concerned Murdoch is convinced the apparition is very human. The eternally dyspeptic Inspector Brackenreid scoffs, “Ghost? I always thought Queen’s Park was full of happy dafties!” and clarifies by barking, “crackpots!”

Samuel Jenkins of the Toronto Gazette informs the Constabulary at Station House No.4 that Chilton was linked to the illegal dumping of slaughterhouse waste directly into Lake Ontario. After being exposed, he supposedly sold the property and went into politics. A numbered company now owns the land and the board of directors is composed of two Chilton cronies. As the province's lands commissioner, Chilton was pushing the government to purchase that exact piece of property for an inflated price. On the other hand, George shares information from the City Records that thirty years ago on the very land on which the legislative buildings now sit was the University Lunatic Asylum for Insane Women and that explains why Queen's Park is haunted. Murdoch restricts Crabtree’s investigation to the ownership history of this Ashbridge’s Bay property. But George remains steadfast to his theory about the rumoured haunting and paranormal activity; with encouragement from Dr. Grace and a little assistance from Dr. Ogden he investigates the old files of inmates at the asylum.

Meanwhile, Julia tells William that an evening with the hospital board is a chore at the best of times, but that she must live up to her arrangement with Darcy by attending it with him. She can't let him lose his position or reputation and William agrees that's only fair. “I wish we lived in a different time, when we could be together and the world wouldn't care.”

Back at the Parliament Building, while George and Emily set up the scrutiny camera, a second man, Dr. Ansel Fraser, dies in a similar fashion. According to Asylum committal papers, Dr. Fraser used to work for the University Lunatic Asylum, George explains, one inmate was Abigail Marshall, the late wife of Thaddeus Walsh, and that the Queen's Park ghost is the insane deceased wife of the Provincial Secretary! Upon questioning, Walsh claims his former wife is haunting him. Ghost or not, someone's going to a lot of effort to haunt Thaddeus Walsh. Then, George and Emily discover a glowing substance on Dr. Fraser’s hands. As Murdoch suspected, the substance and its luminescence is the key that leads them to the murderer who is very much alive.

Briggs says he saw a ghost push Chilton, and this ghost glowed.

Crabtree finds another witness who saw the ghost that night.

One company shell inside another.

His own investigation has been waylaid.

Emily and George talk of their kiss. . .

Another crime scene, another victim.

George finds the connection in the old asylum files.

What concoction holds a glow for five hours?

"I am being haunted by my former wife!"

Dr. Fraser's wife was the matron at the asylum. 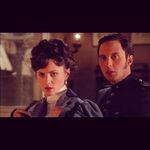 Emily Grace and George Crabtree
Add a photo to this gallery

Retrieved from "https://murdochmysteries.fandom.com/wiki/The_Ghost_of_Queen%27s_Park?oldid=52980"
Community content is available under CC-BY-SA unless otherwise noted.