Start a Wiki
Sam Mactier is a member of a professional cricket team of the Athletic Sports Club, introduced in Season 11 of Murdoch Mysteries, portrayed by Steve Belford. 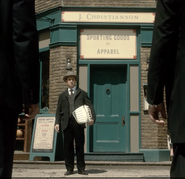 Retrieved from "https://murdochmysteries.fandom.com/wiki/Sam_Mactier?oldid=45933"
Community content is available under CC-BY-SA unless otherwise noted.