Russell Yuen is one of Canada's busiest character actors. A fourth-generation Canadian, born and raised in the Montreal suburbs of St. Laurent and Pierrefond, with deep connections to Vancouver (all of his extended family live there still), Yuen was guided by his parents to become a doctor. However, his studies came to an abrupt halt when a chance Drama elective turned into a full-time pursuit. After studying Theatre at Concordia University, in the honors program, he quickly moved into film and television where he has found continuing success.

A dedicated athlete, Yuen spent his time as a white water rescuer and rafting guide in Northern Quebec, ran a Nautilus facility and worked as a fitness trainer. Yuen is also an enthusiastic scuba diver, a mountain and ice-climber, an in-line skater, a mountain biker and a fencer.

Yuen has an extensive list of television credits on both English and French projects and series. He was most recently featured on the popular French series Jack Carter, in the recurring role of impotent mobster "Wong Phat". He has a recurring role in Diva and other recent television credits include principal roles in: Relic Hunter; The Associates; A Touch of Hope; and The Adventures of Jules Verne. Television credits also include multiple appearances in Kung Fu:The Legend Continues, and roles in Urban Angel, Counterstrike, John Woo's Once A Thief, and PSI Factor. 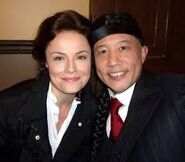 Arwen and Russell
Add a photo to this gallery
Retrieved from "https://murdochmysteries.fandom.com/wiki/Russell_Yuen?oldid=19796"
Community content is available under CC-BY-SA unless otherwise noted.