The Death of Dr. Ogden
Murdoch Takes Manhattan
A Case of The Yips
Weekend at Murdoch's

Dilettante
Roger Newsome, of the Mimico Newsomes, is a puzzler of Westerly Club who plays hard squash, a charter member of the Toronto Auto Club and the Golf Club. More recently, he is an avid bird-watcher who claims to have spotted the first Inca tern in all of North America.

More than once, he has been a suspect in a Murdoch murder investigation. He annoys Constable Crabtree to the point of hatred: George feels bad even thinking it, but can't pretend it's not true.

Murdoch and the Cursed Caves (Mention)

Home for the Holidays (Mention)

A Case of The Yips

The Death of Dr. Ogden 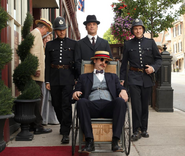