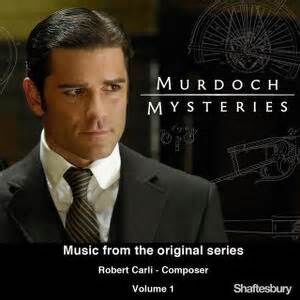 Murdoch Mysteries' composer is Robert Carli one of Canada’s most in-demand composers for Film & Television.  The diversity of Robert's music can be attributed in part to his years of experience as a performer (saxophonist) of musical styles ranging from avant-garde and classical to jazz and rock. Yannick Bisson (William Murdoch) has said, “We have the best composer in television!”

Balloon Ride, William Remembers, and Let’s Start At The Beginning - all variations on their theme.

The Balloon Ride,starting in waltz time, underscores the end of Anything You Can Do... It starts with Julia’s line “William! What are you doing here?” and is the finale for Season 2.

William Remembers, a melancholy étude, starts off with those simple notes/chords followed by the soulful strings.  It underscores William’s dream of Julia in bed with him in Convalescence to the wordless end scene of Murdoch and Julia in Murdoch of the Klondike, and to Julia reassuring William at the end of Murdoch in Toyland.  It sneaks in and out throughout the seasons but rarely finishing until Julia appears at the ball in 20th Century Murdoch, again first in sotto voce leading to Julia’s line “Darcy and I have parted . . .” and plays all the way through with fireworks! It is the finale piece of Season 5.

Let’s Start At The Beginning is a longer variation of the Balloon Ride offering a hint of joyful whimsy, building to urgent crescendos (with that soaring feel Carli does so well) in three movements which gives it even more possibilities – variations used from the end scenes in Murdoch Air and Loch Ness Murdoch to the proposal scene in The Death of Dr. Ogden.

The theme Robert Carli calls Julia and Murdoch* can be heard in its romantic melodic motif underscoring their kissing scene in the alley by the Grand Theatre in Unfinished Business from Season 7.

In his own words, Robert Carli talks about Murdoch music*

Sample the music from Murdoch Mysteries (Asylum and Nightmare with Hélène Joy as Julia Ogden and Yannick Bisson as Detective Murdoch with James Pendrick in Flying The Plane) and his other recent projects at his beautifully designed website: http://robcarli.com.

A Merry Murdoch Christmas: Music from the Holiday Special is now available for download.