Murdoch Mysteries Wiki
Register
Don't have an account?
Sign In
Advertisement
in: Recurring Cast, Males, Season One,
and 10 more

"The Annoying Red Planet"
"I, Murdoch"
"The Tesla Effect"
"Confederate Treasure"
"War on Terror"
"Murdoch Air"
"The Spy Who Came Up to the Cold"
"Election Day"
"24 Hours Til Doomsday"
"From Murdoch to Eternity"

Peter Keleghan is a Canadian actor and screenwriter,  graduate of the London Academy of Music and Dramatic Art in England and received a BA in English drama from Toronto's York University. In spite of early advice to give up his chosen profession, he took his unique straight-man approach to comedy and went on to become one of Canada's best-known actors.

He got his start at Toronto's famed Second City comedy training centre and was an active stage performer until moving on to television. He moved to Los Angeles and appeared on Cheers, Murphy Brown and Seinfeld and in a recurring but brief role on the daytime soap, General Hospital.

Peter Keleghan returned to Canada. He was cast as Alan Roy, the heartless film tyrant in Rick Mercer's Made in Canada, and as Jim Walcott in Ken Finkleman's cynical sitcom The Newsroom. These 2 shows earned  4 Gemini Awards for best ensemble performance in a comedy.

Peter Keleghan is featured in the play Dry Powder with Rebecca Liddiard at the Toronto Centre for the Arts April 4 - 20, 2019.

Peter Keleghan is married to Canadian actress Leah Pinset, who appeared on Murdoch Mysteries in Season 4 as Mrs. Irvin. 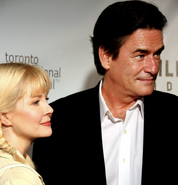 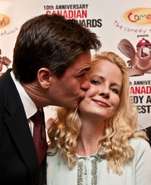