2017 Canadian Screen Awards' Best Host in a Lifestyle Talk or Entertainment News Program or Series for Still Standing
Jonathan "Jonny" Harris hails from Pouch Cove, Newfoundland and Labrador, Canada. He is a Canadian comedian and actor best known for his roles in various television series, such as “Still Standing”, “Murdoch Mysteries”, and “Hatching, Matching and Dispatching”. He’s also appeared in several films including “Grown Up Movie Star”, “Moving Day”, and “Young Triffie”. He appears regularly at the Halifax Comedy Festival, the Winnipeg Comedy Festival and at Montreal's "Just For Laughs Festival". Harris has also appeared on the television series Republic of Doyle and the Shaftesbury Films series, The Listener. He’s also works behind the scenes in both writing and producing productions – adding to his successful career in the entertainment industry.

As a young performer, he worked summers at the Rising Tide Theatre located in Trinity Bay, Newfoundland – for five consecutive summers, developing a keen interest in performing, eventually leading him to gain his first role on television.

By 2006, as there wasn’t a whole lot of work for actors in St. John’s, Jonny Harris thought he’d be penniless in a ditch somewhere. Then, his friend Sherry White suggested he could do something like Andy Jones’ one-man shows – and he did. Harris wrote performed a one man show called Out of the Bog touring it around the country. Then, Harris was cast as Mary Walsh’s son in Hatching, Matching and Dispatching which landed him an agent. The first couple of auditions included Murdoch Mysteries. But the description of Constable Crabtree was about a big intimidating guy who was the muscle of the team – so Harris figured he wouldn't get that part, but at his audition, MM producers informed him that the character would be more the comic relief. (Aug. 21 2019)

In 2008, Harris takes up the mantle of Constable George Crabtree on Murdoch Mysteries from Matthew MacFadzean who played the character in the original Films. He’s been with the series since its inception, and has been nominated for two Gemini Awards for his performance.

In 2012, Jonnny was cast in the film “Moving Day”, then appeared in “Murdoch Mysteries: The Murdoch Effect” before working on an episode of “The Listener”. In 2015, he had another big project as the writer, producer and host of the show “Still Standing”, the hybrid comedy and reality series following him as he travels to a small financially struggling community, where he performs a stand-up comedy show for the town’s residents, integrating his newfound knowledge of the town. The show has been nominated numerous times, and has won two Canadian Screen Awards, one for Best Host in a Lifestyle, Talk or Entertainment News Program, and the other for Best Writing in a Factual Program or Series. Jonny Harris won the 2017 Canadian Screen Awards' Best Host in a Lifestyle Talk or Entertainment News Program or Series for Still Standing.

Jonny Harris appeared in The Pilot, the eighth episode in the first season of Frankie Drake Mysteries (2017) as an older retired copper George Crabtree, who is a member of the Aviator's Club. 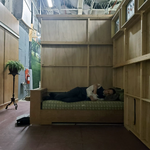 Mates in A Murdog Mystery