After testifying at Mary Thompson's trial for murdering her husband Percival that the woman is criminally insane and should be committed to an asylum, Dr. Julia Ogden receives an anonymous postcard saying she has condemned an innocent woman. Dr. Ogden and Detective Murdoch re-examine the case and find an anomaly in the time-line but the Crown Attorney isn't interested as he's convinced the woman is guilty. Further investigation reveals that Percival Thompson's business partner, Alexander Wainwright, automatically assumed 100% of their business upon Thompson's death - an agreement they signed just one week before the murder. Wainwright promptly vanishes.

With the assistance of the indefatigable Mrs. Brackenreid, who has clearly taken charge, Julia is in the final preparations for her wedding. She and William make it to the altar on the big day but midway through the ceremony they realize they overlooked something very important in the Thompson case. 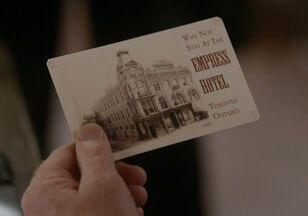 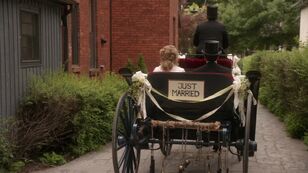 Retrieved from "https://murdochmysteries.fandom.com/wiki/Holy_Matrimony,_Murdoch!?oldid=49582"
Community content is available under CC-BY-SA unless otherwise noted.