Despite their efforts, the DWEA was not successful in advancing the cause of women's suffrage in Canada at either the Federal or Provincial levels. No bills were introduced between 1893 and 1910 for women's votes, and the conservative National Council of Women of Canada would not give support until 1910.

Unlike the flamboyance and occasional violence of British, French and American suffrage campaigns, Canada's was peaceable and urbane and with humour, reason and quiet persistence– very much in keeping with the Murdoch Mysteries' women, Dr. Julia Ogden and Dr. Emily Grace.

On the Waterfront Part 1 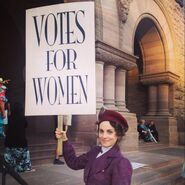 Add a photo to this gallery
Retrieved from "https://murdochmysteries.fandom.com/wiki/Dominion_Women%27s_Enfranchisement_Association?oldid=47877"
Community content is available under CC-BY-SA unless otherwise noted.