Dilton Dilbert, who works in City Records, was first introduced in Season 9 of Murdoch Mysteries, played by David Hewlett.

Dilton Dilbert is not interested in what one is able to do. He cares only what one does. He adheres strictly to the standards of civic comportment, "In dealing with the public, your tone of voice will at all times be even and articulated. Cuss words of any sort will be subject to an immediate fine of five cents." Thus, he has a swear jar, "A string of colorful invective will prove quite costly, I assure you." 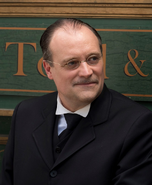 The Accident
Add a photo to this gallery

Retrieved from "https://murdochmysteries.fandom.com/wiki/Dilton_Dilbert?oldid=52862"
Community content is available under CC-BY-SA unless otherwise noted.