Lovers in a Murderous Time

Detective Murdoch investigates the murder of Julia Ogden's husband, Dr. Darcy Garland who is found on his living room floor with a bullet through the head. No murder weapon can be found and there is no sign of forced entry. His housekeeper, a somewhat hostile Mrs. Weller, confirms that Garland kept a gun in the house. She also says she had been given the day off by Julia who, according to the neighbor Mrs. Smythe, arrived a short while later. When Julia returns to town, claiming to having helped an abused woman, Penelope Erwin, escape her husband Desmond, Murdoch attempts to track both people down but they apparently don't exist. Chief Constable Giles removes Murdoch from the case given his relationship with Julia and takes charge of it himself, Brackenreid as well when he vehemently protests. As the evidence mounts, Julia is arrested and goes on trial. Murdoch is convinced she is being framed. When Julia takes the stand, the fact that Penelope isn't present to testify for her only solidifies the prosecution's case against her. The jury ultimately finds her guilty and sentence her to hang. As she is dragged out of the courtroom, Murdoch promises to exonerate her. Then suddenly, he hears clapping behind him. He turns around and spots James Gillies, who vanishes from sight. Murdoch runs out of the courthouse to search for him but Gillies had already disappeared. He then tells Brackenreid of his sighting.

Chief Constable Giles at the Blackboard 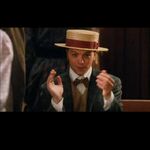 Retrieved from "https://murdochmysteries.fandom.com/wiki/Crime_and_Punishment?oldid=53067"
Community content is available under CC-BY-SA unless otherwise noted.