Toronto
The City Morgue is the facility where postmortems are conducted for the Toronto Constabulary. It is located nearby Station House No. 4 on Wilton Street in Toronto.

The City Morgue is the workplace of Dr. Julia Ogden from Season 1 into Season 4, returning as City Coroner in Season 9 to Season 12.

After Dr. Ogden resigns (ep.1217), the new Chief Coroner is Violet Hart, who as a medical student first started working in the City Morgue as Dr. Ogden's assistant, following in the footsteps of Ogden's previous protégé, Rebecca James who had started off as the morgue's cleaner in Season 9, whom Dr. Ogden takes under her wings. After graduating from Ontario Medical College for Women, Dr. James leaves the Morgue and Toronto to start her own practice in Season 11.

The morgue skeleton 'Shelley' was acquired and named by Dr. Emily Grace.

During her first visit to the City Morgue in Master Lovecraft, Mrs. Brackenreid, who wants to discuss the book Dracula with Julia, is frighten to death by H.P. Lovecraft lurking in the cold storage.

In Up From Ashes, Det Watts brings badly wounded George to the morgue, telling Miss James they need her help. A first time: George on the slab being operated upon. Miss James removes the bullet and saves his life with the help of Watts. Later, when Julia returns to the morgue, she embraces and acknowledges Rebecca for saving George.

When the good doctor states, "Just a slow day at the morgue", the Detective adds, "Good news for the living." (ep.1106). Ironically, a closet in the City Morgue is used to bring a new life into William and Julia's world (ep.1110).

By the end of Season 12, after Dr. Ogden leaves the City Morgue to pursue her new calling as surgeon, Miss Violet Hart succeeds her mentor; this promotion is unprecedented in Toronto history and is a cause for attention, if not causation. 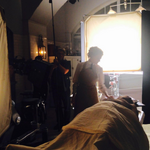 The Spy Who Loved Murdoch

The spectroscope in Concocting A Killer

In The Glass Ceiling

The Prince and the Rebel
Community content is available under CC-BY-SA unless otherwise noted.
Advertisement