She is married to Peter Stebbings, who plays James Pendrick in Murdoch Mysteries. They have one daughter. 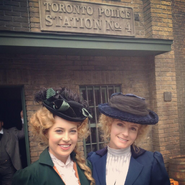