Painted Ladies
"Bend It Like Brackenreid" is the sixth episode of the tenth season of the Murdoch Mysteries and the one hundred thirty-eighth of the series. It first aired on November 14, 2016.

As Murdoch investigates the strange death of a footballer, Brackenreid gets caught up in the team's run for the Olympics.

An old friend of Brackenreid’s is coaching at the games to decide who represents Canada at the 1904 Olympic Games, the exhibition games between U of T and Galt, when an unfortunate tragedy takes place on the soccer field. The murder of star player Robert Semple means it is all hands on the soccer pitch, with everyone working together on the case. But while Murdoch investigates the football player's death, Brackenreid gets caught up in the team's Olympic quest.

At a momentous football (soccer) match, John Brackenreid, his father, and Thomas' oldest Canadian friend, coach "Nobby" Nobson watch his Galt team compete to win the games to advance to the Olympics. When U of Toronto's star player is downed by a hard hit and doesn't recover, fellow spectator Dr. Ogden rushes to Semple's still body and pronounces him dead. Murdoch is called to the field to investigate. Dr. Ogden discovers that Robert Semple had been stabbed. The other lad tackled him with his legs, so there was no way that Semple was stabbed on the field.

The night before the Galt team hosted a smoking concert for both teams. At 8:00 p.m., he arrives with his teammates at the town hall for the smoking concert. He stayed there for the duration, until eleven. After the smoking concert broke up at eleven, Mr. Semple and his friends, along with Wesley Patten, U of T's captain, carried on to a speakeasy at College Street and Brunswick Avenue.  Nobody saw hide nor hair of him after 2:00 a.m. – until he showed up at the field this morning.

At the City Morgue, Dr. Ogden and Miss James conclude that the cause of death was shock due to a rupture of the liver. It appears the liver was nicked by an average dinner knife, which itself would not have been fatal. But when he collided with the Galt player, Dr. Ogden believes the nick tore open and the liver ruptured. His body went into arrest, stopping his heart.  Given the amount of alcohol in his blood, he was likely inebriated enough to dull the pain significantly. The stabbing occurred between two and four in the morning, likely with a knife that was stolen from the town hall. Also, he may have seen a friend after the stabbing because they found remnants of thread inside the wound and puncture marks, consistent with a sewing needle; a professional did not do the stitching. The Inspector points out that no athlete worth his salt would want to miss a shot at the Olympic Games, no matter what the cost. Crabtree reports that catering is missing a knife but that's not entirely uncommon after such a large function. In fact, they engrave the hilts of their knives with "H&L," in order to discourage such theft.

The next day, Miss James comes across Constable Crabtree rummaging bins in an alleyway, "Just how bad is a constable's salary that he is forced to forage for his lunch in such a manner?" Crabtree explains that he is searching for the murder weapon. Detective Murdoch and the Inspector discovered two trails of blood and he is to follow the route, checking every "... garbage can and sewer hole". Miss James offers to help being used to having her arms elbow-deep in arguably worse conditions and she knows the kind of knife to look for. As they search, they talk football. "Surely, there is a ladies team at the university," asks Crabtree but Miss James doesn't think she'd be welcome. Crabtree reaches for a discarded head of cabbage and places for a kick "...there you are, come on. Nobody watching." Miss James stops short of kicking it, "That looks like blood!" Looking into the trash bin from whence the bloodstained cabbage came, they find the murder weapon wrapped in a bloodier handkerchief. There are no finger marks on the knife, but it does have the engraving on the hilt. Crabtree informs the Inspector that it was found outside Andrew Nobson's hotel. Brackenreid interviews his friend and reveals the bloody handkerchief with his initials but Nobby remains silent, no doubt protecting someone.

Murdoch and Brackenreid re-examine the Galt players, Jack Gourlay and Leland Harcourt. Gourlay has motive, seeing as his fiancé was the one carrying on with the victim. But without the coach's cooperation they have nothing on him. If Mr. Nobson won't speak, perhaps Miss Harcourt will – the last time they tried she burst into tears. The Inspector suggests asking the good Doctor to lend a hand.

When Murdoch and Dr. Ogden question Harriet Harcourt about her alleged "dalliance" with Robert, Harriet breaks down and confesses to the murder, claiming Robert attacked her and she just defended herself. But the evidence doesn't support her story. Murdoch and Ogden suspect more to her story. Murdoch leaves Ogden to elicit the actual story: Robert Semple had sexually attacked Harriet earlier. It was someone else who sought to avenge that act of violence perpetrated against her honor and reputation.

Inspector to Crabtree: "I will not have you copying some toffee-nosed prat repeating another toffee nosed prat. The sport is called football, Crabtree, plain and simple...Should a sport wherein the players pick up the ball in their hands and run down the field be called football, or should it be the sport wherein the players kick a ball with their feet?!" 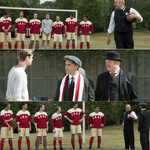